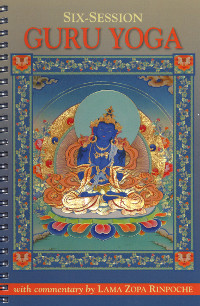 Within the Gelug tradition, practicing the Six-Session Guru Yoga is a daily commitment for anyone who has received a highest yoga tantra empowerment. This booklet provides texts of the full Six-Session Guru Yoga, the abbreviated version, and commentary from Lama Zopa Rinpoche on the benefits of the practice and the samayas of the five buddha families, as well as rich, detailed instructions on how to meditate on each verse of the sadhana.

"Pabongkha Dechen Nyingpo said the Six-Session Guru Yoga is more precious than three galaxies filled with gold. It is much more precious and extremely difficult to find. Why? Because the practice of Six-Session Guru Yoga has unbelievable benefits; it gives incredible protection. Doing this practice eliminates so much heavy negative karma and purifies all ten non-virtuous actions, broken pratimoksha vows, bodhisattva vows, and tantric vows. It also allows us to practice the general tantric vows, the samayas of the five buddha families, and the tantric root vows. Without practicing these vows, there is no basis for tantric realization and no way to achieve enlightenment. This practice creates the cause for a perfect human rebirth and to meet the teachings. Six-Session Guru Yoga creates the cause for one to quickly achieve enlightenment." — Lama Zopa Rinpoche

This practice book is only to be purchased by those who have received a highest yoga tantra initiation in the Tibetan Buddhist tradition.